On Tuesday at 6:14 am, Wikipedia contributors created the very first entry for Donna Strickland, the University of Waterloo laser physicist who, just minutes earlier, was awarded the Nobel Prize in physics. With that announcement, she became just the third woman in history to have won the physics award. It honors work that appeared in her very first published scientific paper, from 1985 — the academic version of a hole-in-one.

Strickland and Gérard Mourou were awarded half the $1 million prize for their discovery of a novel way to amplify the power of laser beams in short bursts. This technology, for instance, is used in laser eye surgery. It’s a major contribution to science that helped move laser technology from its infancy to its myriad applications (cutting, drilling, manufacturing, data storage, surgical work, you name it) today. Mourou and Strickland were co-authors on the work. Though Mourou was Strickland’s PhD advisor at the time, they are co-credited with the discovery.

Mourou has had a Wikipedia page since at least 2005. But there was no entry on Strickland’s accomplishments until today.

You may think: what’s the big deal?

Why does it matter that an obscure laser physicist didn’t have a Wikipedia entry until she won science’s greatest prize?

One thing that would help is a better understanding that women have made important, inspiring contributions to science.

“When you think about what a scientist means, you probably think of an Einstein figure — a man in a lab or at a chalkboard with fuzzy, unkempt hair,” my colleague Julia Belluz has written. “When you think of a scientist’s voice, you might conjure Neil deGrasse Tyson or Carl Sagan. With these voices and images so pervasive in our culture, it’s easier to associate ‘scientist’ with ‘man’ — and in particular, ‘white man.’”

Women scientists like Vera Rubin, Nettie Stevens, Henrietta Leavitt, Rosalind Franklin, and so many others ought to be just as famous.

And Wikipedia, for all its faults, is the most prominent place where current human history is being told, searched for, and shared. That’s why the new Strickland Wikipedia entry is still important — if belated. A Nobel Prize winner ought to be visible to the young girls and aspiring scientists who may be Googling her name today.

Women still face a lot of discrimination in science

Historically, science and engineering has been a white men’s club. And it shows in the workforce to this day.

In January, the Pew Research Center published a report that found 50 percent of women working in STEM (science, technology, engineering, and math) have experienced gender discrimination on the job, and 36 percent say sexual harassment is a problem in their workplace. 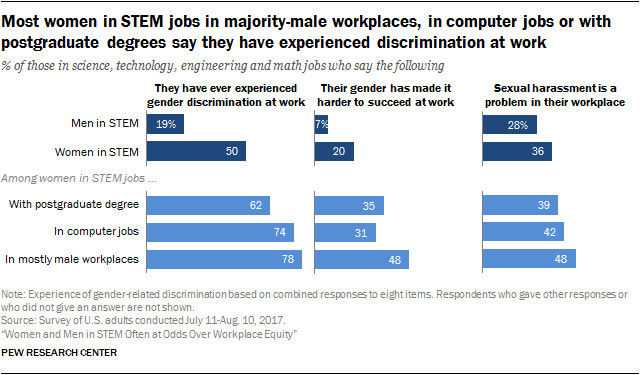 Women represent only 30 percent of the STEM workforce, and see a significant pay gap compared with men’s salaries. Women are often underrepresented at the top levels of academic hierarchies. And problems with discrimination appear to be worse when women work in male-dominated offices, according to Pew. 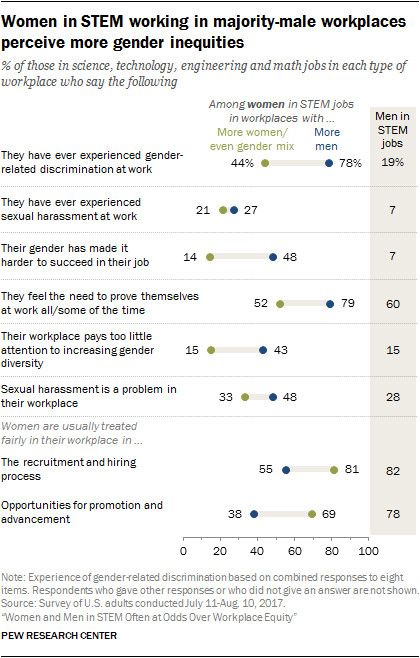 “It’s pretty easy to find inspiring stories and role models who look like you, whose lives mirror parts of your own, if you’re a white man,” Hilda Bastian, a scientist who has worked to raise the visibility of women scientists online, told Belluz. “But it’s hard to find people you identify with if you’re not.”

Of course, there’s also a long history of men taking credit for women’s accomplishments. And the Nobel Committee has skipped plenty of opportunities to award important discoveries made by women scientists.

Sexism lingers in science. Just this week, a CERN (European Organization for Nuclear Research) scientist made headlines when he declared that “physics was invented and built by men, it’s not by invitation” at a scientific conference.

Strickland expressed surprise this morning when a journalist reminded her that she is just the third woman to win the Nobel Prize in physics. “Is that all, really?” she said.

More women need to be recognized for their contributions to science, both by the Nobel Committee and in the pages of Wikipedia.

General Motors makes history with new CFO and CEO
The Two Faces That Mean Business, a Forbes Feature.
How To Overcome Self-Limiting Behaviors As Leaders