Romanian photographer Mihaela Noroc spent nearly four years shooting portraits of — and collecting stories about — women from around the world.

The project, she says, began as something “very genuine and sincere” that she financed, initially, with her own savings — and by being frugal in her backpacking adventure. She later crowd-funded, including a Facebook campaign in March.

NPR’s Lulu Garcia-Navaro spoke with the 31-year-old via phone from Berlin about her photography.

This book is called The Atlas Of Beauty. What is beautiful to you? What kind of beauty were you trying to evoke?

That’s a very long story, actually. I’m going to try to make it short. You know nowadays the word usually has a little bit of a bad meaning in the end. And everything that’s related to beauty is just related to marketing and sales. If you’re going to put into Google, for example, ‘beautiful woman,’ you’re just going to see women with parted lips and a little bit over-sexualized. And that’s not what beauty means. In the end, I think beauty just means just being yourself. I don’t think we have to change ourselves to be in a certain way; I think we just have to keep ourselves as we are and don’t necessarily [need] to change.

Tell me how the project started.

The project started almost four years ago, and I just traveled around the world for one year. And, in the beginning, I was not expecting to do a worldwide project. It was just something very genuine; I just was photographing people that I met and after a year, when [my project] became very popular, I realized that I have to be more responsible and I have to work more.

That’s a very beautiful question because I think everything is very instinctual and, maybe, it’s something that attracts you more than the appearance. Like chemistry that happens for a moment between you and the person that you photograph. And you’re just drawn to the people that you’re going to photograph. It’s something very natural, it’s nothing planned. That’s the beauty of it, and that’s why the book is more honest and more sincere. Because if I would have planned everything, probably it would be very different.

Tell me the story of an encounter with one of the women. How you met her, how long you spent with her. Generally, do you just take the pictures immediately, or do you make an appointment to come back and see the women later when they’ve had a chance to fix their hair and put on some makeup?

Usually, I prefer to photograph without makeup but not all the women are comfortable with that. It’s very different from one situation to another. Sometimes I spend a few seconds, and sometimes I spend a few hours. If the women let me stay with them and photograph them and tell me their story, it is wonderful — but not everyone has the time for that. So whenever I have the opportunity to spend two hours, it is amazing. The woman that I photographed for the cover of the book, it was a matter of seconds. I was in India, it was early morning — usually when you go to the river you are going to see a lot of Hindu pilgrims making their offerings. And so, she was one of them. I saw her in the river. I asked her for permission with my expression and she said yes. I made a few pictures, then I let her continue her offering. It was a magical moment that I saw — there are lots of magical moments like that in our lifetime. Maybe sometimes we are just not too careful to see them, and we are preoccupied with other problems. So maybe photography and this project also gives you the opportunity to just open your eyes and see the beauty that surrounds you. 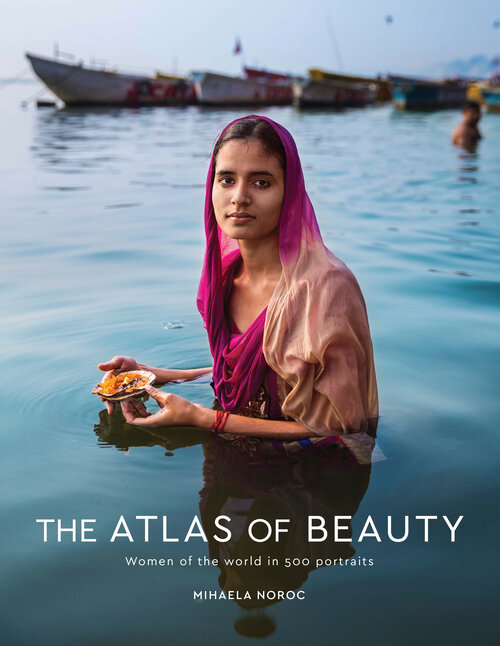 Book cover for Atlas Of Beauty.

Some of the women say they don’t necessarily see themselves as beautiful. They do not see in themselves the thing that you saw in them. Did you find that to be common?

I did realize the women I photographed were not confident in the way they were. I posted their photos on social media and, after they saw all the comments on social media, they saw [their beauty]. [We] are convinced we have to be a certain way and we are never secure in our own way. From an early age, you can really understand that we can be confident and beautiful and however we want. We don’t have to try to change. I think it’s a very big confidence booster.

How did this project change you as a woman?

I matured a lot, and I’m sure that my idea about the world changed a lot — in my idea about how a woman is supposed to be. I’m much more confident. I’m much more respectful of what the other women in the world have to go through every day because I realize more that I am extremely privileged to be in this position. And this is why I’m beautiful.

7 Women Making A Difference In The World.
The Female Heroes Among Us, Forbes Africa Feature.
3 Women in AI Who Are Helping Bridge the Gender Equity Gap