From the moment she learned she was pregnant late last year, TaNefer Camara knew she didn’t want to have her baby in a hospital bed.

Already a mother of three and a part-time lactation consultant at Highland Hospital in Oakland, Camara knew a bit about childbirth. She wanted to deliver at home, surrounded by her family, into the hands of an experienced female birth worker, as her female ancestors once did. And she wanted a Black midwife.

It took the COVID-19 pandemic to get her husband on board. “Up until then, he was like, ‘You’re crazy. We’re going to the hospital,’” she said.

As the COVID-19 pandemic has laid bare health care inequities, more Black women are looking to home birth as a way not only to avoid the coronavirus but also to shun a health system that has contributed to African American women being three to four times more likely to die of childbirth-related causes than white women, regardless of income or education. Researchers argue that the roots of this disparity — one of the widest in women’s health care — lie in long-standing social inequities, from lack of safe housing and healthy food to inferior care provided at the hospitals where Black women tend to give birth.

“It feels like we are needed,” said midwife Kiki Jordan, who co-owns Birthland, a prenatal practice that opened early this year in a 400-square-foot storefront in Oakland’s Temescal neighborhood targeting low-income women of color.

Since the COVID-19 pandemic hit in March, she said, the practice’s clientele has more than tripled.

Images of hospitals inundated with coronavirus patients have sparked a flurry of new interest among women of all races in home births, which account for just over 1% of deliveries in the United States. Birth centers and midwives who attend home births say they’ve been swamped by new clients since the pandemic.

“Every midwife I’m talking to has seen their practice double or sometimes triple in the wake of COVID,” said Jamarah Amani, a Florida midwife and co-founder of the National Black Midwives Alliance.

Many Americans think of giving birth at home as backward and scary, or as a quixotic practice of privileged white women, akin to cloth diaper services and home-cooked baby food.

But the growing interest in home births in recent years has fueled a growing Black midwifery movement that harks back to a venerable, if long-forgotten, tradition in the United States.

Jordan’s practice is now 98% Black, “something I’ve never seen before,” she said. She provides pre- and postnatal care regardless of where women plan to deliver, though the majority of her clientele choose home births. 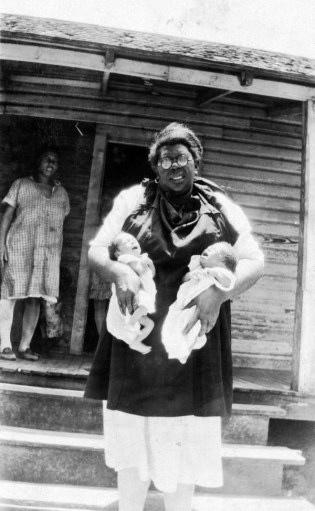 A Florida midwife holds twins in this undated photo. Black midwives in the South continued delivering babies for disadvantaged women in rural communities until well into the 1970s, despite a campaign by modern gynecologists to portray them as superstitious and unfit. (Florida Memory)

African American infants are more than twice as likely to die as white infants, and the risks extend across social class. Tennis superstar Serena Williams’ harrowing 2018 account of her own near-death postpartum experience with a blood clot in her lungs and a cascade of life-threatening complications was a sobering reminder that even wealth and fame are no protection from being dismissed or mistreated during one of the most vulnerable moments of a woman’s life.

At least three Black women have died in childbirth since March in New York City, which was hit hard early on by the coronavirus. One of the women, 26-year-old Amber Isaac, had reportedly tried to switch to a home or birth-center delivery after not getting an in-person appointment with her obstetrician as providers abruptly switched to telemedicine in the wake of the shutdown.

For Katrina Ayoola, 29, avoiding unnecessary medical interventionsthat researchers say can lead to dangerous maternal complicationswas a key reason for switching to a home birth. As the coronavirus hit last spring, when Ayoola was around five months pregnant with her first baby, she was already frustrated with her obstetricians in Martinez, California. She didn’t like their system of rotating providers, to whom she felt she constantly had to reexplain herself. The last straw was being told to go shopping for a home blood pressure monitor. They were sold out everywhere. “I ended up canceling what would have been an online appointment, and I haven’t heard from them since,” said Ayoola.

“I did not feel cared for,” she said.

On Aug. 1, Ayoola delivered her son, Oluwatayo, at home in Fairfield with her husband, Daré, and her mother at her side following a 29-hour labor supervised by Jordan and her partner, Anjali Sardeshmukh.

“At the hospital, I’d probably have had a C-section,” said Ayoola, who said her home birth was “an amazing, empowering experience,” worth every penny of the out-of-pocket $4,500 the couple paid for it — a discount, based on their insurance and income, from Birthland’s typical $6,500 fee.

Cost is a major barrier for poor people to access out-of-hospital births. Medicaid, the federal-state health insurance program that covers many low-income pregnant women, pays for home births in only a handful of states. Since 2015 these have included California, but reimbursement is low and bureaucratic requirements make it difficult for most midwives to accept Medi-Cal, California’s Medicaid program. A quarter of U.S. states do not even offer midwife licenses, making the practice of home birth effectively illegal.

Jordan led a free-standing birth center in San Rafael that was the first in the state to accept Medi-Cal when it opened in 2016. She and a handful of other Black midwives around the country are leading the effort to make out-of-hospital births more accessible to low-income women, a group that could particularly benefit from community-based midwifery, according to a 2018 study.

Many of these birth workers are struggling to break even, but that’s nothing new. 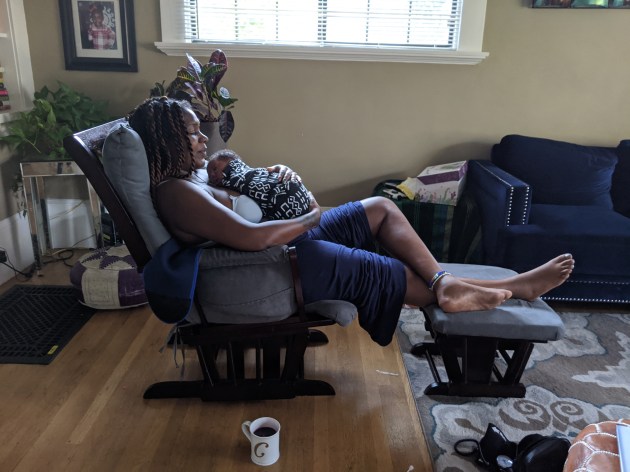 Since her home birth in August, TaNefer Camara has been posting videos and the story of her delivery on social media as an example to other African American women. “Now I’m hearing from Black women who didn’t even know that home birth was an option for them,” she says. (Photo by Rachel Scheier)

In past generations, Black midwives sometimes walked miles and stayed days with laboring women, massaging their feet, cooking and babysitting, and reading from the Bible in exchange for a few dollars or a chicken, according to historicalaccounts. Immigrants and African Americans dominated midwifery during much of this country’s history, and in the South, enslaved women passed from mother to daughter childbirth techniques and remedies brought from West Africa starting in the 1600s.

In certain rural pockets, Black midwives continued to deliver babies for poor Black and white families alike, even into the last century, as modern obstetrics regulated traditional birth attendants virtually out of existence. Midwives delivered half of the nation’s babies in 1900 and just over 10% by the 1930s, as physicians launched a campaign to promote hospital birth as safe and hygienic, while dismissing midwives as “relics of barbarism.”

But in recent years, with hospital birth as the norm, the United States has registered the poorest birth outcomes in the industrialized world. The numbers have worsened during the past 25 years even as they’ve improved in most of the world, largely because of the disproportionate toll on African Americans.

California has led the effort to reverse that trend, cutting its maternal death rate by 55% between 2006 and 2013, though the disparity for Black mothers has persisted.

Researchers have documented countless instances of pregnant African American women being ignored, drug-tested without permission, or sutured without pain medication. 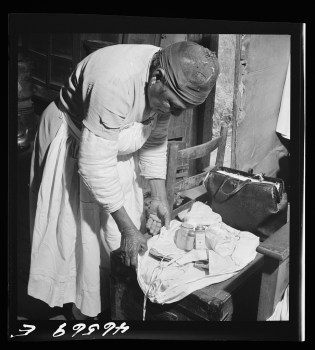 A midwife readies her kit to go on a call in Greene County, Georgia, in 1941. Midwives all but disappeared in the following decades but enjoyed a rebirth sparked by feminism in the 1970s, as women sought to rekindle the idea of pregnancy as a normal process to be supported rather than a pathological condition to be managed by medical intervention. (Library of Congress)

There is a growing consensus among medical researchers and social scientists that discrimination can result in toxic stress that causesmaternal complications or premature births. Respectful, holistic prenatal care can improve outcomes, said Jennie Joseph, a British-trained midwife. Her prenatal clinic in Florida serving mostly low-income women of color has had consistently low rates of maternal complications and premature and low-birth-weight babies.

Joseph believes it matters less where a woman gives birth than how she is treated during the previous nine months, and most of her clients deliver in hospitals.

Groups like Amani’s are encouraging more midwives of color to penetrate what she calls the profession’s “old girls’ network.” Just 2% of American midwives are Black, and research has shown that Black patients tend to do better with Black providers.

There is evidence that their numbers are growing with demand, however. California now has about half a dozen licensed Black midwifery practices, including three that have opened in the San Francisco Bay Area since 2017.

Camara said she wanted to support them: She’s had supportive, competent white birth attendants in the past, “but it wasn’t the same,” she said. “This is returning to what we did before.”

At around 6 on a Saturday morning in mid-August, as a heat wave gripped the Bay Area, she phoned Jordan to tell her she was having contractions. Barely two hours later, the midwives helped her give birth to her son, Esangu, 8 pounds, 6 ounces, on her hands and knees on her living room floor.

Leaving the Nest: How to Cope With Your Child Leaving For College
A Guide to Raising A Feminist Son
Daniel Tiger's Neighborhood Encourages Kids to Love Differences